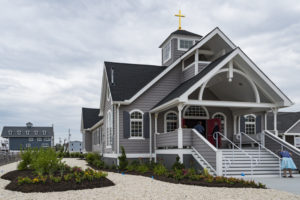 In the summer of 1885, Mrs. Elizabeth Nelson Warren along with her daughter, Cornelia, built a plain chapel on the ocean front of Ortley Beach. It was a lovely site, sitting close to the ocean with its marvelous views and the sound of crashing waves. Volunteer labor, including local shipbuilders, constructed the building representing a modification of then popular seashore cottage style with cedar siding and scalloped shingles. The little church by the sea was dedicated on Sunday, October 1, 1885. Later, Capt. Bill Chadwick, a local sea captain presented a bell for the steeple. It is thought that the bell came from the “Charles F. Meyer”, a wreck that had washed ashore north of the chapel on October 20, 1887.

In the spring of 1916 the daughters of the founder deeded the chapel to the Episcopal Diocese of New Jersey. It has served the summer residents of all faiths continually since 1885.

In 2003, Faith Lutheran Church in Lavallette invited us to use their sanctuary during the winter months. We soon realized that it was possible for us to go year-round. After adding insulation, heat, and air-conditioning, and with our bishop’s permission, we became a year-round chapel in 2005.

On Monday night, October 29, 2012 a horrific storm crashed ashore along the New Jersey coast. Superstorm Sandy did devastating damage to homes and businesses along the entire Jersey coastline, but especially in Ortley Beach. Sadly, St. Elisabeth’s chapel building was swept away with little trace of the structure or its contents. While our Fellowship Hall, built in 2009, was severely damaged, repairs began immediately and soon services were held there. (During the interim, while the Hall was being repaired, we were warmly welcomed by the good people of East Dover Baptist Church.)
In the summer of 2016, after months of hard work, patience, frequent visits to the Planning and Zoning Boards, the Toms River Building Department, hours of planning, meetings and constant prayer, pilings were driven and the new chapel began to rise. The new St. Elisabeth’s Chapel has captured the beauty and seashore characteristics of the original building. The doors opened on July 23rd, 2017 to all who worship Almighty God in the spirit of joy and fellowship in close proximity to the ocean and beach. May our chapel always glorify Almighty God and serve his people with gratitude and love.